Bingo first came to be in 1530, in Italy. Although back then, it was played a little bit differently. A few centuries later, in France, the game was simplified by adding scorecards. From then on, it was also used to teach kids how to spell. Today, it is mostly played in North America, as well as in churches and charity organizations to help raise funds for everyone in need. It is also a part of many casinos around the world, especially those in Las Vegas. Many consider that the origin of the name comes from a sound of a bell, announcing the winner of the round. 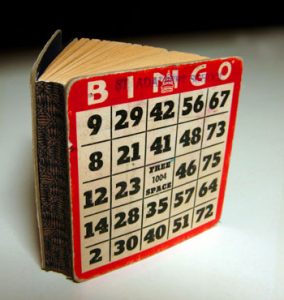 Playing the game of Bingo is quite simple, even kids can play it. You can go to a Bingo hall for a complete experience, or instead, choose to spend a quiet night playing with your family and friends — The choice is yours. All you need are Bingo cards that have 25 random numbers on them. Also, the cards have the word “Bingo” written on the top. This is not just an indicator of the game you are playing. Rather, every letter corresponds to the row of numbers below. That way, they create a combination of letters and numbers that are drawn (for example, B9). For a big win, all you need to do is cover 5 of those numbers, either in a straight line, a diagonal line, or a horizontal line. It’s easy as that!

But before you can start the fun, you will need chips to cover the numbers that you got. The chips are used to prevent confusions — especially if you are playing with multiple cards, an additional thing that makes Bingo interesting. Additionally, if you do not have any chips, you can use other small objects that will help you cover you winning numbers. Don’t forget that every scorecard should have free space in the very center.

When it comes to scorecards, you can use as many or as little as you want. There is no limit, except in your ability to keep track of them! Remember that Bingo, just like any other game, can get pretty heated. So you might lose your concentration and deny yourself the victory.

Lastly, you will need to get a bowl or a bucket in which you can put the numbers that will be drawn. If you play in Bingo halls, there will be special Bingo spinners provided, so you won’t have to worry about it. In these spinners, one can clearly see the Bingo balls turning before being randomly drawn.

Moreover, when you collect 5 numbers in a line, do not forget to yell “Bingo!” It’s not only so you can celebrate your victory, but rather a way to let the caller know they should stop drawing numbers. As you can see, Bingo is quite a simple game to play once you understand the rules. Additionally, there are some tips you can use in order to try to increase your odds. Next to that, there are some more advanced Bingo strategies — So read ahead to find out what they are!

Almost every game needs a mediator — A person to keep track of the game and provide necessary objects for the game to run smoothly. In most parts of Europe, they call this person a card dealer or a croupier.

When you choose to play Bingo, you will notice that players call this person the caller. As the name suggests, the caller shouts the numbers that are drawn during the game. A caller can also play Bingo at the same time if you are playing with your family or friends. However, in a Bingo hall or a casino, the caller is a professional who keeps this role throughout the entire game.

When you start to play any game, it couldn’t hurt to try playing for fun a few times with no strings attached. Many online casinos offer that option so the players can get to know the game better or practice their speed. Keep in mind that once the game starts, things can get pretty exciting early on!

The Right Amount of Scorecards

As we mentioned earlier, you can buy as many scorecards as you want if you wish to play Bingo. The bigger the number of cards — The better the chances you will have at filling out that horizontal, vertical or diagonal row for a win.

However, this could be limiting and slow you down, so you might lose track of the numbers called. That’s why we suggest starting slow, with only two or three cards at first. In due time, you will learn how to multitask better and increase that number.

Before applying complex strategies in order to win at Bingo, you can try some basic tips to improve your skills. Mainly, while playing Bingo you need to pay close attention to your surroundings. Since your hearing is your best friend, you can try playing at smaller Bingo halls with fewer players.

Additionally, you should try getting there a little earlier to purchase the scorecards, greet a few friends, and find a seat before the game begins. Besides the scorecard, you could purchase or bring your own Bingo dabber — A small marker that helps you easily cross of the numbers called so you don’t lose track.

Moreover, Bingo is a game mostly enjoyed between friends, although this can quickly become a distraction. So if you wish to hear everything properly, you can choose a seat closer to the caller — Especially if you are just starting with the game.

As it is advised with many other games, you should not play Bingo if you are feeling tired or irritated. This will not only decrease your concentration, but it will also take away some of the game’s appeal.

Just like any other game, you play Bing to win. Bearing that in mind, the environment in which the Bingo is played can significantly contribute to your chances of winning. For example, you should try playing at smaller halls with fewer players. This is mostly the case on weeknights, so visit your local Bingo hall then, and see if it helps your concentration. Of course, keep in mind that smaller halls (and fewer players) often bring smaller prizes too.

Once you cover these, you can try some more advanced strategies when playing Bingo. You never know what might work!

This strategy was created by an acclaimed British statistician Leonard Tippett. He tried to prove that the longer you play, the better the chances the numbers will be closer to a median of 38. Similarly, shorter games will have a bigger chance of drawing a number further than the median, i.e. 1 or 75. Bear in mind that this theory can not be applied to the 90 ball Bingo!

There is a way to learn which game will be shorter, and which one will be longer. The longer ones have more complex shapes to fill out with numbers, while the shorter ones only cover them in lines of 5 in a row.

This method was created by Joseph Granville, a well known American financial writer who created many interesting ways for investing smartly into the stock market. One of the best-known theories of his is the OBV (On Balance Volume), that can be used in Bingo as well.

You should keep one thing in mind — In most casinos, you will not have the option to choose your scorecard, especially in online casinos.

Since it first came around, Bingo has captured the hearts of not only passionate casino players, but of many others who never even thought of coming near a casino. That is the base of the game’s appeal — Anyone can play it, no matter the age. It is quite easy to learn, and it brings a lot of fun into the room. But don’t just take our word for it — You should try and see it for yourself!

With its long history and everlasting presence in casinos worldwide, Bingo is a game worthy of some in-depth research. That’s why I decided to explain how and why you should

Can one of the most popular games of chances be outsmarted and turned to your favor? How big of an impact does your luck really have, and can you increase